Dustin Parks October 20, 2022 Cup Series, Featured, NASCAR Comments Off on NASCAR Has Failed in the Face of Safety and Precedence 170 Views

NASCAR's handling of Bubba's actions do not send the correct message.

How is it that NASCAR continues to fail when faced with an obvious problem?

In the midst of a time where they decide to have weekly sit-downs with drivers for safety and competition, how can they literally go in the opposite direction just days later?

What do drivers have to do to make the sanctioning body realize they are not doing what they envisioned?

This past Sunday, weeks after seeing driver after driver come forward about experiencing pain from hits, another driver fall into concussion protocol of their own decision based on doctors, and it’s first-ever Chase for the Championship winner declare they are not returning to full-time driving, they outright failed miserably.  Days later, they had an opportunity to make a stand, but looked like the sacrificial pawn on a chess board.

Bubba Wallace, a man who won his first race without having weather determine the finish just weeks earlier, disregarded a fellow competitor, and his manufacturer teammate, with one move.  The unwritten rule in racing, no matter the level, is you never intentionally hook a driver in the right-rear.  At a track like Daytona or Talladega, it can happen, but the style of racing is different.  Sometimes it happens and there’s no way to avoid it.

Wallace could avoid doing the move, and didn’t.

He didn’t double own on his actions; he pulled a hat trick.  Shoving a driver while he clearly was trying to disengage, not once retaliating, and then shoving an official.  Finally, one word in response to seeing a fellow manufacturer driver taken out in his actions simply showed he didn’t care.

NASCAR had the entire scenario served right to them, under glass, cooked to perfection.  And yet, they tossed it on the ground in favor of a quick meal (pun fully intended with the sponsor on Wallace’s car).

A team that doesn’t tighten a lug nut sees a crew member and a crew chief taken from the track for four races, including the first event of 2023, but a driver that could’ve easily sent a fellow competitor to the hospital if things had gone very wrong only gets one?

To quote the crew on Monday Night Football…come on, man!

It was just seven years earlier that we saw Matt Kenseth turn Joey Logano at Martinsville after weeks of on-track incidents, causing Playoff implications, and Kenseth sent home for the races at Texas and Phoenix.  Go back even more, over a decade, when Kyle Busch was put in the wall while racing Ron Hornaday in the trucks at Texas.  Under caution, clearly, Busch rubs Hornaday in the rear bumper, and his spotter is screaming in his radio, “CALM DOWN!”

He turns him in the wall so hard both trucks look like they just got ran over by Bigfoot.

Busch was parked that night, and for the weekend.  His main sponsor, the same one that is leaving at the end of this season, pulled their backing for the final two races of the year.

Explain what makes this different?

By no means does this have to do with skin pigmentation.  NASCAR has suspended drivers in the past for much less.  Guys like Kevin Harvick, Kurt Busch, Jimmy Spencer, they all have seen the ire of NASCAR and they in turn have told them to stay home for a race.  Kenseth got two races for his antics.

In some dirt races that have occurred, drivers intentionally wrecking, then going after the driver, have been escorted off the property, and even in handcuffs.

How is it that Wallace got off so easy?

NASCAR clearly has no true formula for suspending drivers for on-track incidents.  It appears that having a tire come off, or a crew member going after a loose tire under green conditions, is more worthy of a suspension than intentionally sending a driver head-long into the wall at over 170 MPH.  That is not right, and yet that was the decision made.

In a time where drivers want the car to be safer, to ensure they can race and not have to worry about whether a minor hit will put them on the shelf for months, this has been an enormous step back.

There is no way to truly fix this.  It’s not as though NASCAR can go back when new evidence shows itself, like the NFL did in the case of Ray Rice, and extend a larger penalty.

Everything was there, radio traffic, cameras, telemetry, interviews; it was at their disposal.  They could have handed down a penalty that would’ve set a new standard that the sport had never seen, even going back to the 2015 season when they sat Kenseth.

What they instead did was try to protect themselves, like protecting the king in chess while moving so many pieces around.

Their credibility at this point with drivers, media, fans, and anyone involved is extremely low, or even lower than it was already.  Now, they have to figure out how to do damage control.  Drivers know not to turn someone like that, and NASCAR knows retaliation can and will happen.  So what do they do to limit the “Boys, have at it” mentality from becoming a “take him out” mentality?  NASCAR in essence sent a message that a tire coming off is more dangerous than an obvious retaliation.

How can a sport that’s been around for nearly 75 years get something so wrong?

Drivers are saying it is sending a clear message, hoping such an act will stop.  The message may have been sent, but the sanctioning body is going to field questions and complaints for the next few weeks, even through the end of the season.  A year where all the hype of a new car now is overshadowed by injuries and sidelined drivers,

Previous The Next-Gen Has Set NASCAR Back
Next The “Hail Melon” Is a Rule Maker, Never a Rule Breaker 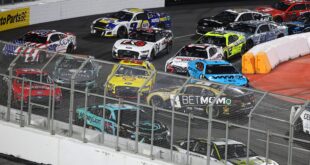 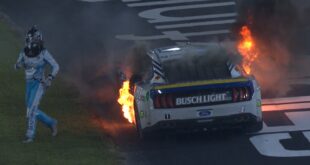 The Next-Gen Has Set NASCAR Back
The “Hail Melon” Is a Rule Maker, Never a Rule Breaker