There's a new fast man in the world of monster trucks.

When it comes to the monster truck industry, the word “record” can take different meanings.  There’s records for most stadium wins, most championships, and there could be a record even for most chassis built, or even wrecked.

However, add one word ahead of record, and things can be rather murky.

Talking about “World Records” in monster trucks, least according to Guinness, there’s not many that are listed.  The longest-standing record still exists, that being the world’s tallest monster truck, Bigfoot #5.  During the pandemic, Feld Entertainment set numerous world records with different drivers in different trucks.  Adam Anderson scored the most trucks cleared in a jump, along with the longest wheelstand.  Bari Musawwir holds the record for most revolutions in a donut, while Krysten Anderson took the record for highest leap.  Adam and Krysten’s brother, Ryan, locked down the longest two-wheel bicycle, and Tom Meents holds the record for the longest nose wheelie.

One other record was locked down in 2020 by Feld Entertainment, one by Bryce Kenny, who clinched the speed record in a monster truck, becoming the first driver to officially top the 100 MPH mark.

Six years earlier, it was Mark Hall that held the record at 99.1 MPH, but Hall and the entire Hall Brothers Racing crew in testing had hit 104, and have said if there was more time available they could have topped it then.

This is the record that became a focus of a driver who already holds one world record, but wanted another.

Joey Sylvester, the pilot of the Bad Habit, holds the record for the longest jump in a truck.  In fact, he set the record twice.  Back in 2010, he set the then-record of 208 feet, beating Bigfoot driver Dan Runte’s record of 202 feet that he set back in 1999.  Two years later, Runte took the then-new Bigfoot #18 and took the record back in Indianapolis, Indiana, at the 4-Wheel Jamboree with a leap of 214 feet and 8 inches.

Sylvester would then take the record back one year later in a big way, sailing his prior Bad Habit truck 237 feet and 6 inches, a record he still holds to this day.

In late 2019, at the SEMA show in Las Vegas, Sylvester would unveil his entirely-new Bad Habit truck, a modern chassis with a familiar Richard Midgett powerplant between the frame rails, with some different tuning for some maximum power along with an evil sound thanks to the straight headers.  His sponsorship with Yokohama resulted in a truck with some of the meanest tires ever used on a truck, but after nearly two years, a pandemic, and a lot of crazy competitions, the 1979 Ford body was getting worn out.

This year, he unveiled the first-ever Jeep Gladiator monster truck body, courtesy of his local Jeep dealer sponsorship out of Boardman, Ohio.

It was then that he also revealed that after several test sessions, he was going after the Guinness World Record for speed in his monster truck.

Heading to Summit Motorsports Park in Norwalk, Ohio, not far from the famous Summit Racing Equipment headquarters, Sylvester was part of the “Night of Fire” at the speedway that included burnouts, drag racing, even an appearance and race pass from John Force.

As the night wore on, anticipation built.

Drag racers of all types, from dragsters to pro touring cars, even jet-powered trucks were making passes down the track.  But, Sylvester was waiting for his time to shine.  Fans were enjoying every moment of it, as over 45,000 people would make their way into the stands for the night’s festivities.  Sylvester began to prepare as well, as he made his final walk-around of the truck, checking everything to ensure the setup was right, and that the truck was set.

Sylvester’s “hater cut” cleated tires were nowhere in site, least not for his competition truck.  They were, instead, bolted on his Mayhem ride truck, which was giving rides to fans all weekend courtesy of both his crew chief, Kyle Kunkle, and his wife, Gabby.

Instead, his truck had some rather slick tires that were going to give him maximum grip on the asphalt.  The front axle had a set of worn out Sudden Impact Racing tires, while the tires on the rear axle were a pair of Goodyears that were worn down smooth.  So smooth that if any more rubber came off the steel cords would show.  Maximum grip, with the right air pressure, for a truck that was going down the drag strip.

Finally the time had come.

Sylvester rolled out and could feel the energy of the crowd on either side of the strip, since he could not see out the side windows due to being strapped into his race seat and HANS device.  He warmed up the tires with a couple hits, and then with his wife guiding him back, the Bad Habit Jeep Gladiator rolled all the way to the wall.

Belts pulled tight, visor down, and the actual Jeep soft top no where in sight.  The time had finally come.

Sylvester looked ahead, made sure he had the right line, rolled out of the brake, and then let his right foot push the throttle all the way to the floor as he shifted into high gear.  The Bad Habit Gladiator raised the nose just enough to keep the power to the tires while also giving him a full line of sight down the track.

The truck roared down the track with the engine screaming out the “zoomie” headers and after going through the speed trap and the timing lights.  The top number on the finish line scoring for the ET didn’t matter as much as the number on the bottom.  That is the one that listed the speed when the truck went through the trap.

When the board lit up, the crowd did as well.

Sylvester’s official recorded speed on the board, which also was confirmed on the timing sheet…101.84 MPH.

After all the testing, all the adjustments, and even a new body, the man that has become an outlaw in the monster truck industry is now a two-time Guinness World Record holder.  As he pulled into the pits, his mother was waiting to greet him, his crew chief, and his wife all giving congratulations.  Normally, he’d celebrate his accomplishment with a cold brew High Octane Coffee, the business he started over five years ago, or a bottle of Chill2O water.  Both would’ve seemed appropriate considering it has been extremely hot in recent weeks.

Instead, he got handed a bottle of champagne and popped the top on some bubbly, with Gabby at his side.

Guinness will have to officially certify the speed, but for all purposes, he is a record holder once again.  The smiles from the crew and everyone at Summit Motorsports Park were prevalent.

The monster outlaw is now a two-time world record holder.  The question now remains…what’s next on his list?

Find out potentially as the Outlaw Monster Truck Drags return to the Canfield Fairgrounds in Canfield, Ohio, on September 24.  It starts at 9 a.m. with the Rooster Rally Car & Craft Show at the fairgrounds.

Thunder Alley will open at 2 p.m. for fans to meet the drivers and have pictures with the trucks. After the car show awards, the field will parade into the competition area at 4:30 with the show set to roar at 5 p.m.

More trucks are yet to be announced for the event, including the lineup of the half-size Pro Mod monsters.  Check out Outlaw Monster Truck Drags on Facebook and Instagram for all the updates.

Previous Dustin Off the Next Race: Verizon 200 at the Brickyard
Next Daytona as the Decider is a Disaster in Every Way 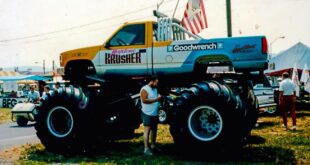 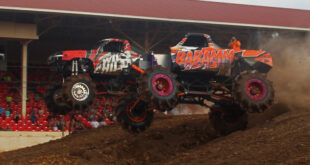 Change is inevitable; things continue to evolve, and when things become stagnant, it loses interest.  ...

Dustin Off the Next Race: Verizon 200 at the Brickyard
Daytona as the Decider is a Disaster in Every Way