Taking the risk of moving the 20th edition of the Monster Jam World Finals away from the mecca that is Las Vegas ruffled some feathers among many fans, especially ones that spent 19 years booking their vacations for late March.  For this year, Vegas was not the home for the biggest event of the season.

Instead, a venue that had already hosted one show this year got the chance to welcome the big show.  Although not in Sin City, the one advantage Monster Jam had was availability to home.

Feld headquarters is based in Orlando, Florida, so it made sense that the company decided to hold the show at home base.  This allowed access to the shop to get parts, replacement parts, and even replacement trucks if necessary.  It also gave fans a chance to see something that literally no one had seen before, especially those that maybe could not make it to Las Vegas because of the cost of travel.  Now, it’s potentially a shorter trip, with the same excitement.

What everyone quickly found out was the need to adapt, and it did not even begin with the drivers…it was the dirt crew.

Trying to build a track for Monster Jam is no easy task, even with the help of computer designs to map everything out as close to scale as possible.  What cannot be planned on is issues in making the design work.  When track crews came in last weekend to start preparing the track, sure there was the rendering that was done at the season kick-off, but that design changed.  No longer were there two long channels of obstacles surrounding the outside racing lanes and jumps.  Instead, some of the obstacles were added, and partially reduced and reconfigured.  Not a bad deal.

But, with a completely new racing design, the biggest change came with building the starting lanes.

For the first time, for any monster truck promotion, the stadium actually became part of the track.  At the end of Camping World Stadium, the open end with no “nose bleed seating,” there is a stage area platform.  This was used before a couple years ago by World Wrestling Entertainment as part of their Wrestlemania setup.  The area is extremely large, and it allowed the sports entertainment company to put together a massive 70-yard entrance ramp for its performers to enter to.

Although Feld designers weren’t looking at that route, they did come up with an idea that had never been seen…positioning the trucks on that stage, and have them start in an elevated position.  This meant the trucks would leave the starting line, and immediately go downhill into the stadium, an unprecedented concept.

The original rendering called for a ramp leading up from the pit area outside the stadium to the starting gate, while after the final jump the trucks would exit through the middle tunnel.

But, after running into issues of creating a ramp like in the concept, track crews and officials had to come up with another way to get the trucks to the line.  It seemed simple enough, as they decided the trucks would enter through the tunnel, then turn up their respective lane before maneuvering into position to get lined up and test the remote ignition interrupter radio.  But, even this needed adjusted, because the seating that would house the ramps had to be covered, and somehow made to support 11,000-pound machines, even for a short run down the lanes.

What the rendering called for was for the clay to be filled up not just over the seats and plywood, but a couple feet more and also on the staging platform.  With potentially room for eight trucks, as Monster Jam tries to save time in having the other races ready to go once one finishes, weight and integrity needed thought out.

So, rather than risk all the dirt becoming an issue, and making one lane better than the other, it was time to go back to the drawing board.

Dirt was laid down to cover the plywood, and the seats.  But, the track crews then added both concrete and asphalt to not only keep the lanes and starting pad even, but also strengthen the integrity of the lanes.  It also reduces safety risk on the platform as the concrete and asphalt has the ability to hold a lot of weight, harden, and also be sticky for the BKT tires that Monster Jam runs on all their trucks.

The new track design and layout made officials aware that this track is a learning experience for everyone, which also means if this track is used again next year, it will come together even quicker.

Monster Jam is rotating the location of the World Finals, as the old venue that held the previous 19 events, Sam Boyd Stadium, will be getting replaced in a few years with a new venue.  Although it is unclear if that venue will host the World Finals or any Monster Jam events once built, this gives a chance for experimentation for Monster Jam to try out something new, and challenge it’s drivers.

This new track design is something no one, even the most experienced, drivers have seen nor raced on.

I’ve been a fan of this sport since 1990, been involved with the sport for almost seven.  I’ve seen off-road style racing, circle-track designs, straight-line, figure-8 style and even three-wide competition.  I have been to Las Vegas to witness the original fastest track in the sport, but nothing has compared to this track in Orlando.  It may not be as fast as Vegas, as we were seeing with qualifying times on Wednesday, but what this track does is add a lot of driver ability back into it.

There’s no more “lay on the pedal, then the brakes, and hope you make it through the corner.”  Here, the driver has to work on going from a high vantage point, where they can’t really see the floor of the venue, to a low point and work to the outside of the track.  In Vegas, it was a matter of negotiating an alley but keeping speed up.  Here, being too fast down the hill could hurt the corner.

Not overshooting, or also cutting, the chicane at the bottom of the hill is the second part of what makes this track harder than the Vegas track, at least in my opinion.

When Wednesday’s qualifying session was done, both for the Double Down Showdown and the main bracket, the drivers were more comfortable after a few practice runs, but it was still challenging.  This is where the newest element will come into play on Friday:  the cushion.

The Florida sun will dry out the track, and the loose dirt on top will be pushed away for the more tacky dirt underneath.  But, as the qualifying passes went on, a total of 32 passes in each lane, the final corner leading to the final jump became extremely hard packed, almost black.  Just like at the local dirt track, it seemed a groove and a cushion was developing.  Although that many runs won’t happen on Friday, the track will wear out, and it will happen again.

Should that cushion build again on Friday, being able to run right against it and keep in the groove, will be a deciding factor in crowning a champion.

Just like is seen at Eldora, the first few passes the drivers will be creating the groove, and the preferred line.  But, as the track gets worn in, driver ability to stay in the groove, and ride that cushion, becomes the objective.  At Eldora, being able to ride that high line and put the right rear tire directly on that cushion means a fast lap.  Here, putting the right rear tire in that corner means fast acceleration to the jump.

The top qualifier for Friday’s racing bracket, Tyler Menninga in Grave Digger, showed his ability to find that groove in his first pass when he blistered the new track at 13.103 seconds.  But, in his second pass, he caught a rut in the cushion, and it put the truck on the side.

Even someone with the talent, and the control, that Menninga has, the track can and ultimately will, win on a few occasions. 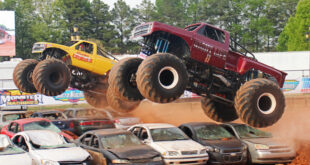 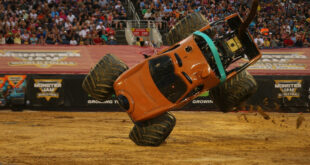 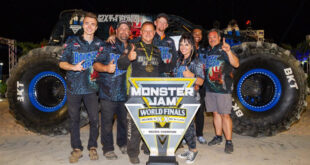 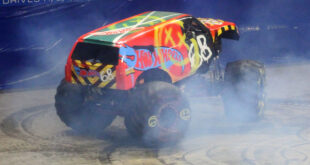 Being a champion means being the absolute best at what one does.  That’s something the ...